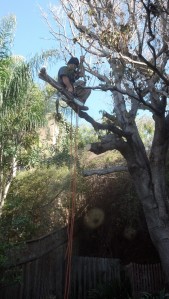 Rafael Stoneman in his natural habitat.

“i figure if Ramana wants me to drop the body, he’ll
make it happen, and if not, HE will keep the tree standing.” Rafe

I was painting a big three story Queen Anne
off a forty foot ladder, up near the  roof line
when God whispered in the ear of the ladder holder
“You’re not needed here. Walk away.”

So he walked away
and when the steel toes of the ladder kicked out
I fell
hitting  the roof of an ugly family room tacked on in 1971,
the year you were born.
That saved me.

But I kept on rolling off that second roof and hit a 6×6 cedar post
planted upright in the garden for no discernible reason,
that broke my fall a second time and my collarbone too.
So I finally come down to earth.

There were other falls.

Thirty-five feet off an apartment house I was decking in 1972.
The roof over the third story porch broke loose and I went with it
fast and furious like a bird on fire
but peaceful too, like it was happening to somebody else.
Landed on my back in a pile of boards.
Three cracked vertebrae, a week in the hospital and out.
God said “It don’t hurt that much.”
Funnily enough, he was right at the time.
Just starting to now.

I fell off a concrete dam into the Blanco River when I was a kid
but didn’t drown.
Fell out of a hickory tree, twenty-five feet or so, in 1959,
grabbing at limbs that tore holes in my arms, screaming all the way
down.

Jumped off the roof of a one car once, testing a parachute made from a cotton sheet
that had cowboys printed on it, firing six guns out of both fists.
The air was so thick with damp, I thought that I could walk upon it.
But that one doesn’t count.

Other falls I don’t remember so well anymore.
They say forgetfulness and loss of grip are gifts of age
and I agree with them.

In 1988, after that collarbone business, I went to my Guru
Shri Shri Shri Shivabalayogi Maharaj!
Beautiful, fierce and kind, all at once,  just like a little child
whose best friend is a cobra.
He gave me blessed vibhuti, a chunk of sacred ash used for initiation.
Said, “Keep this in your car. You’ll be OK.”
That’s what I did, moving it from the glove compartment of one junker work truck to another,
until that last one caught fire and burned
nearly taking the whole neighborhood with it!
By this time my Guru had passed on
becoming the breath that all of us breathe forever and forever
and forever.
Now if I fall, I will not be falling.  I will fly.

All I’m saying, Rafael, is be careful my friend.
You are needed here and you are much
loved.

Charlie Hopkins and Rafael Stoneman 2013, along with Freddie.

Poems and prayers written from 1969 until the present. Love, family, spiritual longing, all mixed together. A big mess. Thank you for reading this. . .